I have come to see, as the pastor of young up-and-comers, how important death-awareness can be for confronting a problem I believe goes hand in hand with the avoidance of death. When the reality of death is far from our minds, the promises of Jesus often seem detached from our lives.
– Matthew McCullough

In this episode of The Hope + Help Project, Christine Chappell interviews author and pastor Matthew McCullough. They discuss Matt's book, Remember Death: The Surprising Path to Living Hope to learn how cultivating "death-awareness" clarifies the relevance of Jesus's promises in the midst of our everyday problems. During the conversation, Matt offers listeners an overview of the Christian tradition of "memento mori" (latin: remember death) and explains some of the reasons why death-awareness was such a prominent part of daily life in earlier centuries. He also considers why 21st century Western Christians have increasingly shoved the realities of death from their consciousness—and examines the various negative impacts such death-avoidance has had as a result.

Other questions considered:
• Why hasn't American prosperity and "happiness" risen in tandem over the decades?
• In what ways does death challenge the core identity of every human being?
• How have medical advances altered the way death is perceived and experienced in modern American society?
• How can we have death-awareness without erring on the side of denial or despair?
• How does a relationship with Jesus Christ help us face the awful realties of death with assurance and hope?

Ring from Jamestowne Mentioned in Episode

The Hope + Help Project podcast offers compassionate biblical conversations about life's challenging problems. The purpose of the podcast is to share Christ-centered comfort and clarity for those seeking biblical solutions for the struggles they face. The podcast accomplishes this by offering a mix of interviews with seasoned biblical counseling professionals and ministry leaders on a variety of topics. Listeners can expect to receive biblical wisdom as well as practical steps for facing suffering, struggling and sin with courage and grace. Hosted by author/writer Christine M. Chappell.

Matthew McCullough (PhD, Vanderbilt University) serves as pastor of Trinity Church in Nashville, Tennessee, which he helped plant. He is the author of The Cross of War and writes occasionally for 9Marks and the Gospel Coalition. 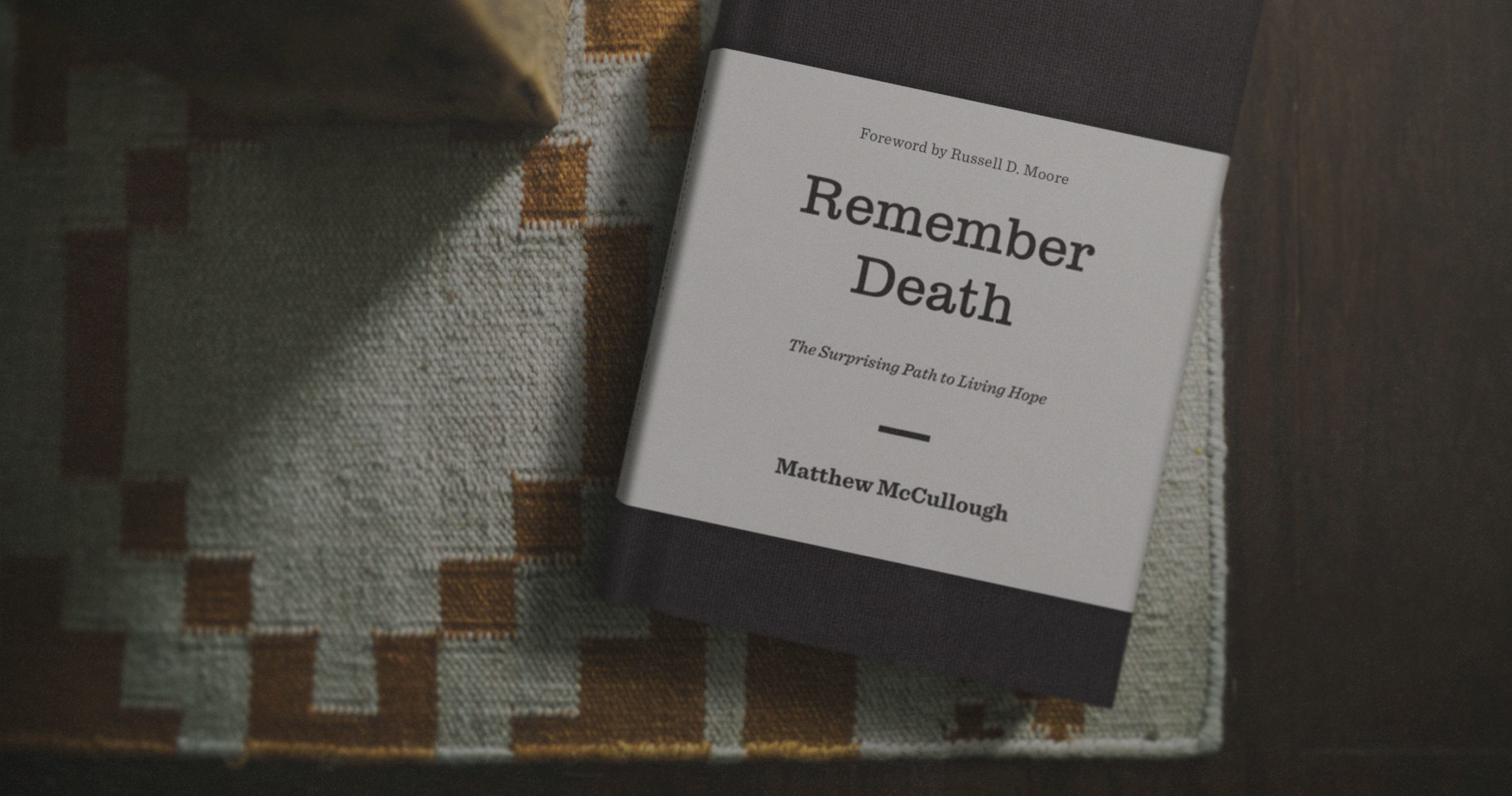 Remember Death: The Surprising Path to Living Hope • Life-expectancy worldwide is twice what it was a hundred years ago. And because of modern medicine, many of us don’t often see death up close. That makes it easy to live as if death is someone else’s problem. It isn’t.

Ignoring the certainty of death doesn’t protect us from feeling its effects throughout the lives we’re living now. But this avoidance can hold us back from experiencing the powerful, everyday relevance of Jesus’s promises to us. So long as death remains remote and unreal, Jesus’s promises will too.

But honesty about death brings hope to life. That’s the ironic claim at the heart of this book. Cultivating “death-awareness” helps us bring the promises of Jesus from the hazy clouds of some other world into the everyday problems of our world—where they belong.
View Book on Amazon

Memento Mori: What It Means and Why It Should Matter to You
Recognizing that death is a bigger problem than we’ve realized is just the first step, not an end in itself. As we experience its sting everywhere, we’re also experiencing the relevance of Jesus’s promise of victory. In other words, recognizing the relevance of death every day is how we recognize the relevance of Jesus every day, too.
Read More
Why Christians Should Think About Death
Why should Christians think more about death?
The Bible says it’s wise to do so.
It connects us to the promises of God.
It grants us solidarity with those who are on the brink of death.
Watch Video
3 Reasons You Should Preach through Ecclesiastes
Ecclesiastes surprises people. That’s partly because it says things you don’t expect to hear from the Bible. But I’ve found people are also surprised by how familiar the Preacher’s perspective sounds, how immediately it resonates, perhaps especially for those of us who live and pastor among the modern western middle class.
Read Article
*Disclosure: Bear in mind that some of the links in this post are affiliate links and if you go through them to make a purchase I will earn a small commission. Keep in mind that I link to these resources because of their quality and not because of the commission I receive from your purchases. This does not affect the cost of the resource, and the decision is yours whether you choose to purchase them from my link or not. Thanks for your support!

Christine M. Chappell
Author, Writer, & Podcast Host
Christine Chappell is the author of Clean Home, Messy Heart, Help! My Teen is Depressed, and is the host of The Hope + Help Project podcast. She is passionate about advocating for biblical one-another care and discipleship in the context of the local church. Her writing has been featured at Desiring God, The Gospel Coalition, Risen Motherhood, Servants of Grace, and other Christian platforms. Christine blogs regularly at christinemchappell.com and lives in South Carolina with her husband and three children.

Click to learn more about my weekly resources.
Every week, a different topic. Carefully curated Christ-centered resources designed to equip you to face life's spiritual challenges with courage and clarity.

Click the picture to the left, or the mail icon above to learn more about my weekly deliveries.

Or, if you know you want to receive them already–complete the form below.

Hope + Help for a Psychiatric Diagnosis with Ed Welch

Why I Wrote Help! I’ve Been Diagnosed with a Mental Disorder

Books at a Glance Resource Summary

All Things Podcast: Help! I’ve Been Diagnosed with a Mental Disorder

Equipping You in Grace Podcast: Help! I’ve Been Diagnosed with a Mental Disorder

It Could Be Worse, But It’s Still Hard

To the Weary He Says, “Come and Be Carried”

He Redeems Even Our Scars

Crushed by Grief to Give Hope in the Mourning